journey through the senses at Monte Vista

Daniel Birch and I had the privilege of visiting the stunning campus of Monte Vista and spending an entire day touring the facilities (they're massive) talking to various students and staff.  Have a read of Daniel's blog as he gives an overview of where they are at in terms of pedagogy.  This blog is going to focus on the environment at Monte Vista as it really was quite spectacular and there is an interesting vision behind it. 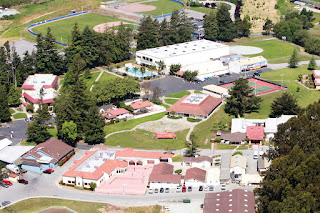 Steve Sharp has been at the helm of Monte Vista for 12 years and will be retiring in 6 months time. During this time he has transformed the campus into something special.  Also, he is also well-known as he was the first educator in America to put ipads into the hands of his students and that is still evident today as tech is widely used across the school.  The only whiteboard I saw was a pod of mobile boards being utilised by students.  I spoke to the students with most saying the ipad was their tool of choice.  Teachers share course material on Moodle however I did see other higher spec devices being utilised for specialist subjects or learning.

I feel like we visited Monte Vista (translated means mountain views) during a slight 'pause'  before potentially significant transition occurs.  It was evident from our conversations that a new wave of change is about to happen under new leadership.  I'm looking forward to keeping an eye on what evolves.  My personal A standout for me was the warmth, generosity and openness of Steve and everyone at the school.  The students genuinely appeared to be happy and well supported.  We encountered the students during SAT testing time and would have expected an air of anxiety however everyone seemed to be relaxed and had the time to chat.

Steve's vision for the school was to create 'The Kingdom' on earth at Monte Vista and what they have achieved is creating an environment that is stimulating to the senses.  To expand on this comment, it was explained to us that it was a conscious decision to build a school rich in the sensory domain.

My day at Monte Vista, a journey through the senses...

Taste
To begin our day we were treated to a breakfast, alongside the students, that was something you'd expect to eat in a top-end restaurant.  Produce is organic, sourced locally from the surrounding farms & orchards and cooked by a 4-star chef.  Students are fuelled by healthy meals throughout the day and the area where they eat did not resemble any school cafe that I've ever seen.  It closer resembled somewhere in Ponsonby where you might go for brunch on a Sunday.

We all know teacher's need caffeine and there was definitely no Nescafe fine blend on-site.  For the coffee connoisseurs out there and there is a Starbucks on campus serving ever blend imaginable.  To my delight they even had decaf so I was able to keep the blood sugar levels on a reasonable keel.

They have big name brands partnering the school, which helps to explain the high end, glossy, new resources everywhere. Coca-Cola is a partner (not so healthy) but overall the taste experience food was delicious, made with love and the students came together to eat and relax which was really nice to see.  Monte Vista has a roll of 1100 students so they have staggered break-times to cater for numbers. (Sidenote:  They don't have teacher's on duty as they encourage their students to problem solve and mediate issues themselves)

I was so busy enjoying my food I failed in capturing a decent picture of the cafe but here is the smaller bistro serving area and canteen just situated off of the main cafe area.


Sound
During breaktimes local music is played on speakers across the expansive courtyard which created a really upbeat fun vibe.  Students and a few teacher's would dance along and everyone appeared to be enjoying it.   I really noticed the calm and positive atmosphere around the campus and the cafe area seemed to be a real hub.

There were lots of spaces around the grounds to sit and relax.  There was a peaceful atmosphere that made you want to not leave.  In fact, on campus a 91 year old lady still resides who attended the school as a 14 year old then trained as a teacher, worked there and then retired.

On the tour we stopped in to visit a vocal class and were blown away by some talented singers.  Performances and celebrations occur regularly within the school.  There lots of opportunities for students to be seen and heard. 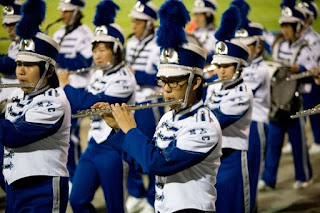 Every space in this very old school has been transformed over the past 12 years.  Subject rooms had themes.  For example when taking French class you are transported into a cute french cottage.  In Spanish class, when lights are flicked on everybody is to speak in spanish, and when they're off you can switch your conversation back into english.  My literary skills do not do this justice I think a picture can tell a thousand words so have a look below at some of the space design elements shown in the photos.  In most spaces you can see sculptures of  Mustang horses.  The school has about 20 horses, stables, and showjumping arena. 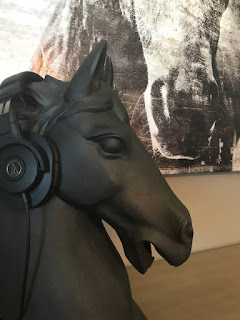 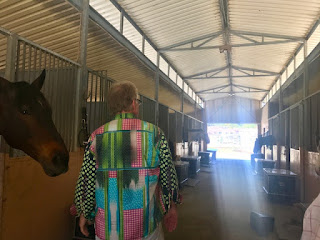 Monte Vista have a full-time designer who works alongside staff, weekends are spent fossicking around garage-sales to acquire some of the nicknacks.

Beyond the classrooms the walls were adorned with artworks made by the students, quotes, sculptures, water fountain features, rugs that create textures.  Overall, it was a very sensory experience!  I feel like I've scratched the surface in summarising all of the sights.

Feel
Overall, this was a campus with wow factor!  Clearly having partners like Nike, Starbuck and Coca-help but the warmth of the people was evident.  I'm really interested in seeing what pedagogical developments happen and would love to have another visit in the future.