If faced with making desperate small talk at a dinner party, I could easily talk at length about toffee pops. They're a bit of a passion really.  I consider myself well-researched.  Basically, I've eaten a lot of them over the years!  I think I could hold an audience with my enthusiastic commentary and references back to the Carlos Spencer ad, for those in a plus Gen Y bracket.  There are some biscuits I could not do justice. Refer to diagram above and exhibit 1.  The 'random creamy filling things.'  I've observed them from afar.  Watched with curiosity as colleagues and friends have eaten them.  I don't think I've ever queried anyone on their choice.  Carol Dweck would not be pleased with my closed mindset.  They simply look gross.

Aside from pondering small talk topics there has been something far more pressing that has me a little bit worried.  Why is it that with all of this talk of MLEs our education community is becoming a battlefield?  I realise this is a tad dramatic but seriously there are so many polarising views out there and it concerns me greatly that we are missing the opportunity as a profession to reflect on our practice and possibly reform and redesign what learning could be!

Unlike the Griffins sampler box, in teaching at least, I've sampled the lot.  I've had the opportunities to teach and work in a traditional school, hybrid set-up (bit of a mix of traditional with MLE) and MLE (3 years young).

Disclosure.  Am I a MLE convert? 100% yes.  Do I think MLEs are effective without a shift in teachers practice? No.

I understand the fear rippling though our teaching community and rightly so as our precious clients are small people with a bright future that we have a significant amount of responsibility for helping prepare them for.  In saying that, I don't think parents/caregivers should be ignored, as they play a vital role in helping to support. One thing people I think people don't think about  when considering MLEs is they actually help get parents in the door.

The mere thought of entering some schools makes me feel anxious.  Am I breaking a rule?  Where can I sit?  Is my shirt tucked in???? Add to that mix, a regression back to being yelled at by teachers at the end of their fray, tucked away in four-walled classroom jails and I'm a nervous wreck barely able to hold an intelligent conversation, (I can go beyond toffee pops) let alone be in a state to learn...

Creating a space that is open and warm makes everyone feel more relaxed. It's not rocket science; MLEs don't equate to disengagement just because there happens to be a beanbag present.  Set up properly should allow people to move freely and comfortably around.

The feedback we receive from parents is they love the feeling and aren't cast back into negative childhood school experiences.  The flipside is the kids experience this too, and they are mostly capable of navigating without getting lost or distracted.  Actually they self manage.  Remember those key competencies at the front of the NZC?  Oh, and there are teachers so we redirect when necessary or support.  MLEs don't eat teachers.  We are present.

Schools should be about the children.

Below is a photo of the Hobsonville Point Primary "ping pong room and staffroom.'  Typically the staffroom is a sacred place for staff only, where ritualistic coffee drinking and dunking toffee pops takes places.  Dunking still takes place  but in our MLE it's frequently punctuated by the squeals of excited children playing.

Sometimes we get asked, 'but what about the teachers 'downtime' and to be honest sometimes a ping pong is not what you want to hear especially near the end of term when ritualistic coffee drinking increases in frequency.  So, we explain our needs to the children and respectfully they leave us to our coffees. A conversation with children is so much more powerful that a word like respect emblazoned across a wall.  Daniel Birch, our principal sums it up nicely when he says, 'it's the children's school and we respond to that.' 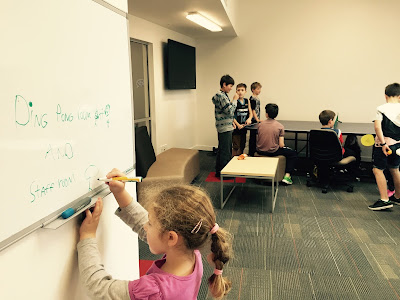 Please don't knock the MLE until you've had the chance to ask a few questions and don't let this talk of 1970's hippie, roam free kids doing whatever and whenever in noisy barns put you off investigating the possibilities of changing practice.

Dear I say it, but there is some 'academic excellence' and accelerated learning occurring roaming around those open-plan spaces.

Meanwhile, I guess I should be sourcing some of those those random creamy filling things...maybe they won't be so bad?