How do we honour the key competencies?

You don't have to go far, to find research that discusses the skill sets that children need to grow, to be successful during these times of exponential growth. As educators, we are in the privileged yet challenging position of helping to prepare children for jobs that researchers predict do not yet exist and we are on the cusp of change that will occur at a rapidly increasingly pace.  Jane Gilberts, 'Catching the Knowledge Wave' discusses the concept of knowledge and how a traditional education system does not necessarily support the development of the skills that will be needed to be successful.  Readings like this have made me sit up and sit up, pay attention and reconsider.

So, what skill sets are we growing?  When I was preparing myself for the exciting (yet slightly overwhelming position, if I am to be honest) of joining the foundation leadership team at the yet to be opened Hobsonville Point Primary, I found Guy Claxton's work to be very useful in shifting me from thinking purely curriculum areas to a more holistic view that included thinking about the possibilities of developing dispositions.   It also helped me begin the reflective process of questioning, why we do what we do in schools and provoked thoughts on the possibilities of redesigning what school looks like.  Statement's such as, "The school I'd like would be one whose primary aim was to teach me how to live...Today, academic knowledge has become the sole interest of many school, and few (teachers) are daring enough to abandon the exam rat-race for the job of creating thinking, adult individuals." (Chrisa, 16) helped me to shift my mindset.

In terms of process, I had to start by reflecting honestly on what I though I knew, then begin dreaming big then be challenged by Daniel, my principal around dreaming even bigger and have this vision clear in my mind before even considering dispositions.

The position I was in at the time, was I was fortunate to be moving into a brand new state of the art, modern learning environment.  We had many discussions around the fact that the environment itself would be good enabler for these skills to be grown (BYOD, open-plan etc) but without a dispositional curriculum working alongside an academic the impact would not be great.  Also, a huge factor would be on teacher actions supporting the development of these dispositions.  For example, you cannot grow self managing students without freedoms.

The New Zealand Curriculum places the Key Competencies at the front however in my opinion a lot of teachers struggle to create opportunities, within traditional systems, to provide opportunities for children to grow these skills.  I have reflected on my own practice and I realise now that my honouring of the key competencies has been, in many cases, at surface level.  There are many reasons for this but I believe that pressure around national standards and still having the claws of curriculum coverage in my back has not helped.  It is exciting to know that we do have a curriculum that gives us the freedoms to create experiences for children that are rich and empowering if we are brave, open to change and prepared to change then we can create really rich and powerful learning experiences for children.

So, what do we do at Hobsonville Point Primary?   We have designed an emerging curriculum that places a dispositional curriculum alongside an academic curriculum.  I say emerging, as we are constantly reviewing the practices as we evolve.  We have started with dispositions, as this is what we value and after a year and a half of operation are beginning to explore essence statements for each of the learning areas.

So, how do we do it?  Teachers plan through a concept that is directly related to NCREL 21st Century Skills, identify dispositions to be experienced, reflected on and then make curriculum links.  Concepts fall out of these links to be explored.  The students are immersed into a 'world they do do know, they do not know' then through capturing interests and passions students delve deeply into new knowledge and learning.  They do this in various ways such as Project Based Learning, problem Based learning, Inquiry and Social Action Projects to name a few.

What are the dispositions H.P.P values?

We have identified:
At the time we were exploring the dispositions, we had been profiling our staff using the Herrmann Brain Dominance Instrument (HBDI) which is a system to measure and describe thinking preferences in people.

Overview Of The HBDI®

The world’s leading thinking styles assessment tool, the Herrmann Brain Dominance Instrument® (HBDI®) is the assessment at the core of Herrmann International’s Whole Brain® Thinking approach. Developed in the 1970s by Ned Herrmann, then a manager at General Electric, more than thirty years of research and innovation stand behind the validity of the HBDI®.

The 120-question HBDI® assessment, which is administered by anHBDI® Certified Practitioner, evaluates and describes the degree of preference individuals have for thinking in each of the four brain quadrants, as depicted by the Herrmann Whole Brain® Model.
The basis of Whole Brain® Thinking and all Herrmann International learning modules, the HBDI® teaches you how to communicate with those who think the same as you and those who think differently than you. Once an individual understands his or her thinking style preferences, the door is open to improved teamwork, leadership, customer relationships, creativity, problem solving, and other aspects of personal and interpersonal development.

As we value growing the whole self we used this model as a frame to organise the dispositions.  The dispositions look different in each quadrant.  For example, a student demonstrating 'perseverance' in relationships looks very different to a child who is been perseverant in their ideas or organisation.

We developed a curriculum model that places our values at the centre then the dispositions fall out of the four areas of self.  There are natural links between the key competencies and the four quadrants as shown below.

The four quadrants are:
Theoretical,
Organisational
Interpersonal
and Experimental self. 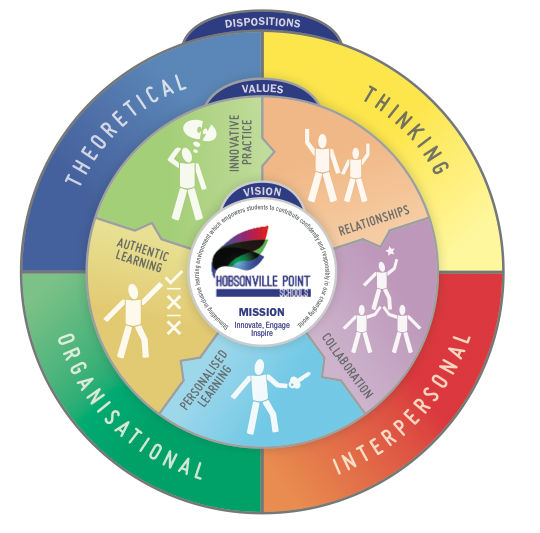 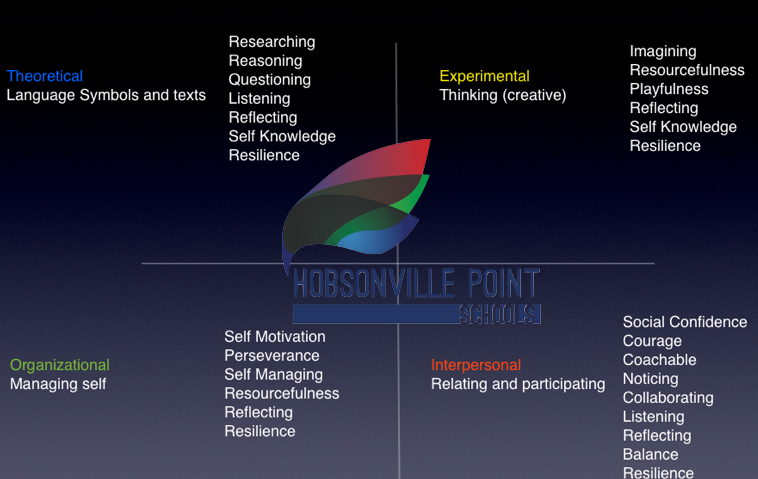